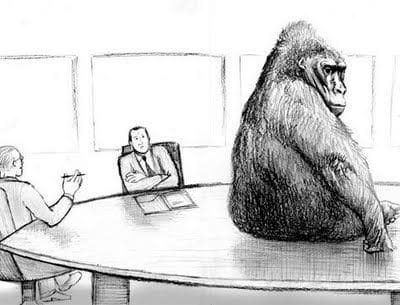 Ever hear of the psychological experiment known as the Invisible Gorilla?[1] It goes like this: You’re asked to watch a brief video of a group of people moving randomly about in a pack. Several of these people are wearing white shirts and passing a ball amongst themselves. You’re asked to count the number of passes that occur. During the video, a person dressed as a gorilla enters the middle of the pack and, while facing the camera, thumps his chest for a few seconds then exits. The video ends and you’re asked to give the number of times the ball was passed. Most likely, you get that right. You’re then asked if you saw the gorilla. Huh, what gorilla? Yes, despite being on-screen for 9 seconds, half of all participants in the experiment never see the gorilla.

Ever hear of the lawsuit captioned Avery vs. State Farm?[2] It goes like this: 20 years ago, an Illinois jury awarded $456 million to plaintiffs in an action against State Farm for its use of inferior car parts in car repairs; conduct which violated State Farm’s own insurance policies. Following a finding of fraud, an additional $730 million was added to the verdict bringing the total to roughly $1.2 billion. That amount was then reduced to $1.01 billion on appeal. State Farm wasn’t done though. It filed yet another appeal, this time with Illinois’ highest court, which granted State Farm the ultimate victory: The verdict was completely overturned.

The events of Avery gave rise to a second suit against State Farm. In Hale vs. State Farm[3], the Avery plaintiffs alleged State Farm had not only orchestrated the recruitment of Lloyd Karmeier but also had secretly bankrolled his successful bid to be become an Illinois Supreme Court Justice in 2004[4]. Why? Because the Avery case was on appeal at that time and Justice Karmeier would now be available to influence its fate, which is precisely what happened. Hale was filed in 2012 and it alleged the events leading up to, and following, the Karmeier election violated the Racketeer Influenced and Corrupt Organizations Act (RICO). Again, the assertion here was that State Farm had organized and managed Karmeier’s campaign behind the scenes; that State Farm had covertly funneled millions of dollars to support the campaign through intermediary organizations over which State Farm had exerted considerable influence. Hale dragged on for 6 years before settling in 2018 for $250 million. The settlement was approved on the basis that only one of roughly 5 million plaintiffs objected. Well, with the claim now going into its 20th year and with individual net recoveries averaging less than $50, it’s a wonder anyone made the effort to object.

It’s unfortunate Hale settled and the public was denied a look behind the curtain. Still, the circumstantial evidence is ample and more than enough to suggest the insurance giant pulled strings and levered its enormous influence to achieve that which it could not before a jury. That’s a serious problem. But we have an even more serious one: you and me. The State Farms of the world will always rent-seek and will always attempt to change the rules of the game to ensure their victory. We know this. The problem is that you and I aren’t doing enough to stop our country’s seemingly inexorable slide from democracy into corporatocracy. We’ve become jaded, resigned, disenfranchised and, according to experts, blind; blind to what’s around us and blind to the very fact of our own blindness.[5] That’s the takeaway from the Invisible Gorilla experiment.

We come to litigation funding. The naysayers want to frame it as a problem but it is in fact a solution born of a problem. Corporate America continues to accumulate power while you and I continue to lose ours in this zero-sum battle. Isn’t that the real problem here? Come on, don’t you see the gorilla standing right in front of you thumping his chest?

“The greatest enemy of knowledge is not ignorance, it is the illusion of knowledge” -Stephen Hawking

[4] In the most expensive judicial election in United States history to that point, Justice Karmeier won the open seat. Ahem, he beat Appellate Judge Gordon Maag who wrote the Avery Appellate Court opinion against State Farm.